Elsa, "Into the Unknown" Power of Not Being Normal

When Disney released Frozen in 2013, it was more than just a family-friendly box office hit. It created a firestorm about the stories we tell and the characters we value. And Elsa, the central character, became an instant icon of the Disney canon. While the Snow Queen of the original Hans Christen Anderson tale was a villain, Elsa in Frozen makes a powerful journey from shutting people out because she feared how she affected them to opening up to those she loves and accepting her inner nature. Even in the conception of the film, “Let It Go” transformed from a villain song to an empowerment anthem worthy of celebration. (Not to mention the go-to song for so many toddlers it created feelings of overkill on James Cameron’s Titanic-levels.) And in the end, the true villains were the fear and demonization of the different.

A lot has been said about Elsa as a character. A rare Disney female character without a love interest. A rare Disney female character who is defined by her relationship with family, particularly the women. An even rarer Disney female queen who isn’t some kind of evil. Many people have taken Elsa to heart as a personal heroine and power media figure. Google “Elsa Frozen thinkpieces” and there will be a bazillion articles about her being a stand in for the LGBTQ experience. I understand and respect that take, although the original didn’t affect me in some profound way upon its release.

The 2019 sequel though? That hit me to the core of my very being.


So like Elsa, let us journey “Into the Unknown” together. (And of course, spoilers here on out.)

An Ode to Mentors - How A Compassionate LCSW Changed My Life 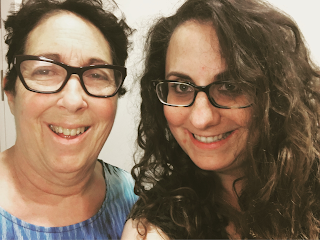 A lot has been said about the importance of mentors. Mentors are meant to guide you through life in personal, professional, and other means by setting an example and giving advice and a leg up on where you need to go. There are plenty of mentors who can get you through the basics, but the best mentors take you for who you are and help nurture and enhance you to become a better person to make an impact on the world.

I can't think of a better example of this than my own mentor through the social work and disability world than my first social work supervisor and boss, Linda. Linda's guidance and advocacy has not only given me professional consul and direction, she proved to be an amazing example of what a disability ally can be.

I'm a Complex Human Being, Dammit! or Identity- vs Person-First Language

Of all the things making up human beings, I'd say a strong identity is the most important. Psychologist Erik Erikson agrees, making that the crucial stage in his theory of psychosocial development. Erikson argues that while adolescents are growing and changing into physical adults, they have to grapple with what social roles they'll take and how they'll define themselves in the world. This leads to someone either developing a strong sense of self or causing major uncertainty of where they fit in, known as "role confusion", that could lead to an "identity crisis" of who they are. All of this is dependent on if that person is encouraged or discouraged by their family, peers, and society at large allowing them to explore different possible identities and accepting their conclusion.

I bring this up because there's a lot of controversy over what people call those on the autism spectrum. Autism is a neurological condition that affects social development, making Erikson's psychosocial development model a lot more complicated over how to recognize autism being a part of one's identity. It could be said autism as a concept is in the adolescent years of "identity vs role confusion", as people argue over whether it should be considered an social identity (aka "identity-first") or something separate from one's overall characteristics (aka "person-first").

Again, I would like to reiterate that my feelings on my use of language concerning autism are my own and I won't dictate what others should do. I'm only using these posts on autism language to express why I feel that way I do and why I do what I do. I'm not gonna tell anyone how they should talk about autism because it's not my place to do so and I don't want people angry with me over it. This is just how I personally feel.

With that in mind, let me explain why I prefer "autistic people" over "people with autism".

It is a universally acknowledged truth that stress is an inescapable part of life. Stress can come from anywhere at any time, and it's always a pain in the ass. I don't know anyone who enjoys being stressed out, and anyone who says otherwise is flat-out lying. But what matters when it comes to stress is how you deal with it. You can either let it consume you or you can manage it in whatever way you find best de-escalates it. (You can also shrug off anything that might give you stress but that will tend to come back to haunt you.)

I've been trying to find out how to do that second part for all of my life. But I know one thing is always reliable - caring for myself is critical to ease stress and prevent it from consuming me. And nowadays, I feel the need to engage in self-care more than ever before to maintain my well-being.

Watching Myself On Screen, or The Current State of Autism in the Media

When I was young and was unaware of my autism diagnosis, I only knew about autism through a Baby-sitters Club book. The book, entitled Kristy and the Secret of Susan, was about one of the titular "baby-sitters" taking on a non-verbal autistic charge and I honestly don't remember much about it, except that the main character Kristy decides to leave her autistic charge Susan alone after unsuccessfully trying to force her to integrate with other kids. I didn't much care much for the book at the time despite being a big Baby-sitters Club fan, and I'm sure if I read it now I'd be appalled at how the characters were written and treated. Either way, I didn't have a reference point as to what autism was because I didn't really have that much exposure to it in media. I had characters that I liked and related to, but none that felt especially representative of me as an autistic girl.

I think it's safe to say that the days of autism being a non-entity in pop culture are coming to an end. Since diagnoses have risen in the last twenty years, movies and television have slowly come to recognize and insert autistic people as characters. Various television shows like Girl Meets World, Sesame Street, Parenthood, and Community have featured characters explicitly stated or implied to be on the autism spectrum. The 2016 crime thriller "The Accountant", starring Ben Affleck as an autistic accountant was a unexpected box office hit and is green-lighted for a sequel. And this August, Netflix will premiere a dramedy about an autistic teenager looking for love called "Atypical":

It looks as though we're getting to a place where there is real case for meaningful autism representation. So why do I feel that we could do better in portraying autism as a whole?

When I first learned I have autism, it felt like a simultaneous blessing and a curse. As I have previously wrote, I spent most of my childhood feeling like an outsider due to things I couldn't control and figured I was slowly going mad because no one would give me a straight answer of why I was the way I was. So it's easy to imagine that the news of my diagnosis was a huge relief in the sense that all my questions were answered. It was, but it also came with the cost of learning that I was not and never will be "normal" because of all the challenges I had. And with not being "normal", my life would always be harder than most people's.

In spite of this, I'm often told I'm a "success story". I made my way through school being fully mainstreamed into honors and AP classes, graduated from college in four years, and received a Masters in Social Work from a prestigious university. I have a good steady job where people appreciate my contributions and have made headway into participating in the disability community of Los Angeles. I live on my own, I don't excessively struggle with money management, and I have good friends and family I can depend on. At the risk of sounding arrogant, it does seem like I am a "success".

So why do I constantly feel like I'm barely keeping it together and what I do isn't nearly enough?
Read more »
Posted by Zoey at 9:00 AM 2 comments:

My autism seems to be a shock to anyone I meet. When I tell people I'm autistic, the most common response I get is "Really? I never would've guessed!" I want to believe that it comes from a well-meaning place of surprise, but I can't shake the feeling that it's slightly condescending to me. Autism affects people in different ways and yet we as a society seem to only accept a narrow affect as being truly autistic - you must either be a "quirky" personality easily fixated on certain subjects and have little to no understanding of basic social interactions or be completely non-verbal completely isolating yourself from people with little to no control over your physical actions. I'm neither of these things and seem to project a certain sense of "normal" where only the most attentive would identify something is notably different about me. That doesn't mean that my diagnosis is invalid, but rather I don't easily appear to be what people seem to think autism looks like.

Case in point, the Autism Society of San Francisco president Jill Escher recently wrote a piece for The Times of Israel (a Jewish Times subsidiary) attempting to make identifying how autism affects people "easier" rather than relying on problematic "functioning labels". In it, she maps out via a "matrix" where different autistic people would be based on things like IQ, social skills, verbal language, support needs, and more. The article has since been taken down from the Jewish Times from what I can assume was a barrage of angry comments disagreeing with Escher, but it still can be viewed on the Autism Society of San Francisco website here. There are lots of reasons why people find this "matrix" format troubling (my favorite pieces on it are written by my friend Christine and prominent parent advocate Shannon Des Roches Rosa), but I want to talk about one particular criticism that affects me greatly: the notion of the "worthy" and "needy" autistic.

Zoey
I'm autistic and that's okay. I sleep all night and I work all day. Of course, there's much more beyond that.